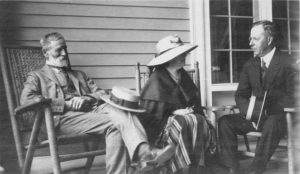 Freelan Oscar Stanley (F.O. or Freel) was born in Kingfield, Maine on June 1, 1849. Freel was noted for having a weaker constitution, due to frequent bouts of tuberculosis. F.O. carried on the love of instruments by making a violin at age eleven, He would later go to Western Maine Normal School (now UMF), graduating in 1871. He then studied at Hebron Academy and Bowdoin. He chose not to return to Bowdoin as a sophomore, after Bowdoin President Joshua Chamberlin, of Civil War fame, required each student to purchase a $3.00 uniform. The students weren’t happy with the colleges new military requirements. Pres. Chamberlin threatened to expel students for not purchasing a uniform and signing a loyalty pledge. F.O. was one of the three students who chose not to return to Bowdoin. He left Bowdoin and taught in Maine and Pennsylvania. In 1880, he returned to Western Maine Normal School as an instructor but resigned a year later because of tb. He went to manufacture drafting tools for students and opened up a factory in Mechanic Falls  to produce them. He lost his business in a fire and later joined his brother in the dry plates business , thus starting their life long joint business ventures.