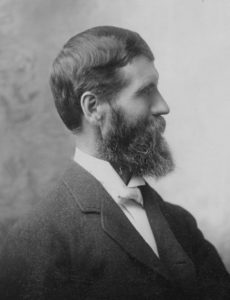 Francis Edgar Stanley, (F.E. or Frank) was born in Kingfield, ME on June 1, 1849. Frank was often known as having the harder head,being more independent and more energetic than his twin brother Freelan. F.E. showed a special talent for drawing and calligraphy penning. This calligraphy was incorporated into the famous Stanley insignia signature, which he completed at the aged of fifteen.

F.E. attended Western State Normal School (now UMF) and became a teacher and principal. He also taught at the Maine State Reformatory in Portland, ME. He continued his love for drawing and started experimenting with an atomizer to speed up his strokes. In 1876, he received a patent for the atomizer, calling it an airbrush. In 1878 he opened up a portrait studio in Lewiston.  In 1884, his brother joined in the dry plate business, thus officially starting a long lived business partnership, where both brothers prospered.